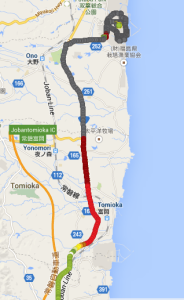 Spent fuel removal at Unit 4 is in progress.

Safecast equipped a vehicle with one of their Nano sensors that was allowed onsite at Daiichi.  Here is the collected data.

NHK did a video report on the conditions workers are dealing with at Daiichi.   View it here.

IMI is offering special holiday pricing on radiation detectors for people who want to send one to Fukushima communities through Safecast.  The same discount is also extended to instruments to be shipped to people in Japan.  Enter HELPJAPAN as shopping cart code to get 20% discount.  More on this on IMI homepage.

IMI is also offering special pricing for Nano kits, and free Japan delivery,  for people who would like to send one to Fukushima communities through Safecast.  Details here.

Safecast has now collected data well beyond Japan, with some data coming in from all seven continents.  More on that here.