Geiger Counter Evolution – Be Part of the Open Data Revolution 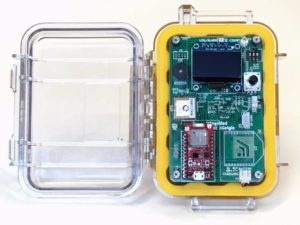 Kickstarter is featuring a new Safecast radiation detector today, July 4, American Independence Day, as part of its Gold program presenting “iconic projects with a twist.” Safecast created something unique in the Geiger Counter World with its Open Source “bGeigie Nano,” which has won much recognition inside and outside Japan, and won a prestigious “Good Design” Award in Tokyo.  The original “Nano” was a kit that required some skill and a soldering iron.   That kit advanced the State of the Art by integrating GPS into the instrument, and by simultaneously rolling out an internet ecosystem to compile and display the data.   Safecast projects have been widely reported on by National Geographic and other respected news outlets.  Safecast is even covered as a model for “surviving our faster future,” in the book “Whiplash” by MIT Media Lab Director, Joi Ito.   While many people have benefitted from kit building workshops, and many more have developed their technical knowledge by participating in the mostly volunteer project, not everyone has the time to build a kit.   The new Raku Nano does not require soldering, so more people can now participate.

Safecast was born during the Fukshima Daiichi reactor melt downs, during a period where reliable and understandable radiation data was largely unavailable.  Safecast is independent and not a political organization, so people of all viewpoints can participate and can see how data is collected and presented.   That in itself is revolutionary, or maybe evolutionary is a better word.  I highly recommend supporting this Safecast Kickstarter Project, which will both advance the radiation detection ecosystem and support a good organization.   There are only seven days left to fund the project, so act fast.

Published in Featured and Fukushima