I donʻt like to talk or think about Nuclear War and Iʻm guessing most people feel that way.   With many world leaders from the Pope to Presidents talking openly about it I think it may be useful for people to have information that can empower them in dangerous situations if they develop.   Geiger Counters detect nuclear radiation and nuclear war produces nuclear radiation, so Iʻm going to share my thoughts on the useful and proper role of Geiger Counters  in a series of posts.

One of the best tools to protect populations during a nuclear event are Geiger Counters, thus the US and other countries built and stockpiled hundreds of thousands of Geiger Counters during the Cold War for use in the event of nuclear conflict. In those days the risk was primarily related to use of traditional nuclear weapons.

Some cities still maintain the capability to detect and measure radiation for security and public health and safety, and to protect first responders.  New York City places Geiger Counters in every FDNY vehicle.

In todayʻs unstable world nuclear war could entail the use of traditional nuclear weapons, tactical nuclear weapons (smaller battlefield devices), the use of dirty bombs (containing and spreading nuclear materials) and/or the actual use. misuse or abuse of nuclear power plants.

The Ukraine war has developed in a dangerous escalation that has included the invasion of nuclear power stations that include Chernobyl and the large reactor complex at Zaporizhzhia.  This is a very serious situation and the best outcome will be actions by concerned parties to de-escalate this situation and commit to safety programs to prevent nuclear materials or weapons from becoming hazards to human health and well being.

If something goes wrong it is important to know that the US government no longer stockpiles and distributes large quantities of Geiger Counters for deployment in emergencies.  This leaves it largely up to public communications from officials, reporting by trusted news networks, to inform private citizens if danger exists. History has shown that emergencies can bring communication breakdowns and that mistrust can flavor public perception of data that is reported. One antidote for disinformation or mistrust of information is education and use of Geiger Counters in the hands of trusted members of local communities.   Public Health protection during a nuclear emergency effects all people mostly equally (women and children are more vulnerable and the human fetus is most vulnerable).   This should never be a blue/red, left/right issue.   Emergencies are times for everyone to pull together.

Not everyone can own a Geiger counter but if communities have access to information from a community member that is trusted then there is less likelihood of confusion. Why is confusion dangerous? The reactor meltdowns at Fukushima Daiichi demonstrated clearly that nuclear events are global events. Radiation does not stop at borders and people react in unpredictable ways. For instance people in the United States were taking potassium iodide pills when there was no need for that precaution. Ingestion of potassium iodide should be done only in emergencies where radioactive iodine is present in the environment or by preescription from a doctor. It can be dangerous for pregnant women to take potassium iodide.  On the other hand, in Japan people were evacuated from areas that were not radioactive to areas that were radioactive because monitoring and communications systems broke down.

The humans that are at most risk in nuclear emergencies are (in order of danger) fetuses, children and women. Female children are at higher risk than males. Decisions for public health protection need to be carefully considered and trust needs to be established before such events in an ideal situation. This series of posts will focus on how to use a Geiger counter in an emergency and how to share data and build quality and credibility.

The image below is an Inspector Alert Geiger counter reading normal background radiation on the forest floor in Californiaʻs Sierra Nevada mountains. 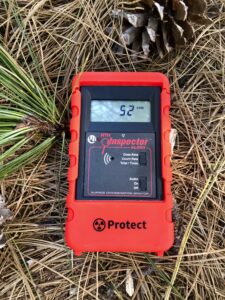