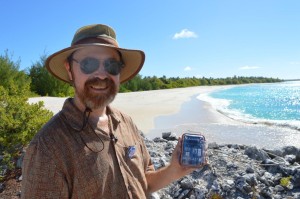 Dr. Ken Buesseler is currently on Bikini Atoll, studying the residual radioactive impacts of nuclear testing that took place there.  This picture was taken on January 18, 2015.   We were able to send Ken a Safecast Nano radiation detector, and will be posting data from the instrument to the Safecast website.  Safecast will also be reporting on Kenʻs scientific mission, so stay tuned to the Safecast Website.

We got this report from Dr. Buesseler as he was approaching Bikini Atoll by boat:

“Essentially we left Majuro on Jan 16, are at Bikini atoll sampling 18-20, head 24 hours to Enewetak (with one sampling station in between for waters in upper 2000m) and then 3 days in Enewetak before the 3 day steam back to Majuro.

This is a privately funded research cruise on the R/V Alucia.  Quite a nice ship compared to our govt. funded ones!  It’s a one off chance to sample an important site of over 100 nuclear weapons tests and about 80% of the total yield from US testing (so many big tests were conducted here).  Given our limits to space and funding, we are not sampling any living animals, plants, marine life, corals, fish, algae etc. so it is more focused on radionuclide concentrations and sources, not on uptake in food chain.  While levels for many will be higher……cesium in the ocean today post Fukushima near the NPP is actually higher than in the lagoons.  Plutonium may be a different story as it was/is? higher here, and quite low from Fukushima.” 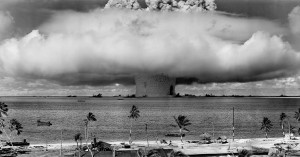 Japan was not the only population to experience the devastation produced by nuclear weapons.  The impacts of nuclear testing on the Marshal Islands population was quite severe.   American service men and women were also exposed during these tests. 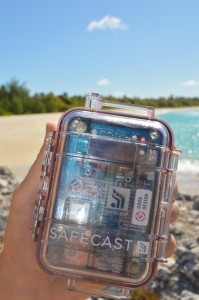 Things look more peaceful in the images Ken is sending us.  This Nano is one of several instruments Ken is carrying.  The Nano is unique in that it contains a GPS receiver that will log geographical position along with radiation data.  The instrument is an open source device designed by Safecast.  This one was built by my wife, Orapin, at a Safecast workshop in Tokyo, Japan

Circling back to another Japan connection to all of this, Ken was able to visit the Lucky Dragon ship in Tokyo recently, as he prepared for this trip.  The crew of the Lucky Dragon was not very lucky, and was hit by fallout from nuclear test Bravo on March 1 1946.  Read more on the Lucky Dragon on Wikipedia here.

There is a lot more to this story, including the data Dr. Buesseler will be collecting.  Iʻm very interested to hear how the ecosystem is holding up there.  Stay tuned here, and keep an eye on Safecast for more news.

Dr. Buesseler is continuing to monitor radiation levels in the ocean worldwide, with particular attention being given to the Pacific Rim post-Fukushima at http://www.ourradioactiveoceans.org