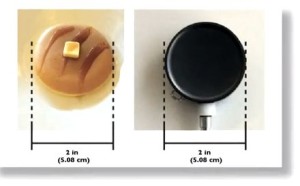 Have you ever wondered why a certain class of geiger counters utilize “Pancake Detectors?”  This creative image by YR-Designs (Tokyo) shows how the form factor describes the detector.

If there is a general purpose radiation detector that can serve in most situations, it is the noble Pancake GM “tube”.   The large area mica “window” on these detectors will allow alpha, beta, gamma and x radiation to pass into the special mix of gasses within the “tube,” allowing them to be detected.

There is a mystique about these detectors because there are only a few people who know how to build them well.   Much of the knowledge, technology and “magic” that goes into them has been passed down from one generation to another, in some cases within families as at LND Inc. in Oceanside NY.

Because of their relatively high sensitivity and low cost, pancake detectors are prized and utilized universally in hospitals, laboratories, research institutions, and carried in the field by hazmat agencies and first responders.    Regulations require the use of these detectors in virtually all hospitals and medical labs in the United States.

During disasters, such as the recent Fukushima Daiichi event, these tubes become hard to obtain and expensive, worth their weight in gold. 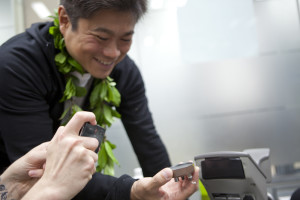 There are less expensive detectors in the market place.  These range from other types of GM tubes to PIN diodes.   Other GM tubes with a mica end window will detect alpha, beta, gamma and x radiation, but not with the high sensitivity afforded by the larger window in the Pancake class of detectors.

The two inch pancake, when utilized for surface contamination, is the standard against which other detectors are measured and compared.  Geiger tubes without the mica window will only detect gamma and x radiation, with the exception of some thin side wall tubes that will detect some energetic beta radiation sources.  In the case of PIN diodes and small GM tubes, the sensitivity to even gamma radiation is reduced directly in proportion to their size, so they become most useful in high radiation environments where gamma radiation is predominant.

There are some limitations to what a trusty Pancake Detector will do.  They are not very efficient for very low energy beta radiation, like that emitted from Tritium, for instance.  They will not identify isotopes.   But we still think they are the best thing on the planet for general purpose radiation monitoring where alpha, beta gamma or x radiation may be present.   And at a small fraction of the cost of the instruments that will identify radionuclides but wonʻt detect alpha or beta.

In the world of radiation detection you usually get what you pay for.   Low cost instruments that detect only gamma and x radiation have valid applications in areas where the mix of isotopes are already characterized and gamma radiation is of most concern.    High cost instruments that will identify isotopes are vitally important for identifying risks related to food and water contamination, and for identifying gamma emitting radionuclides in emergency situations.  Itʻs also important to remember that they give us a limited view of what is happening.

With Pancake detectors it is important to remember that gamma measurements (in mR/hr or uSv/hr) will be affected by proximity to alpha and beta radiation sources.   GM tubes that are not energy compensated (like the Pancake) will also show greater response to low energy photons, so the detector must be shielded by plastic, aluminum or distance to be a consistent indicator of  gamma doses rate across a broad range of energies.  More on this later.

2 inch Pancake detectors are featured in the Inspector Alert and Onyx by IMI.   This detector is also utilized in a number of innovative Safecast instruments, including the bGeigie Nano.  All of these products use high quality LND Pancake Detectors exclusively.