What is a Geiger Counter?

There is a lot of confusion these days about what a Geiger Counter is and is not.  Amazonʻs handling of search terms and results for Geiger Counters is especially amusing, even comical at times.  Here is one result that came up for me on a recent Amazon search with the terms “geiger counter.”

Whoa!  What does unicorn meat have to do with Geiger Counters?  Nothing I can think of.  But neither do the devices below that showed up on the same search: 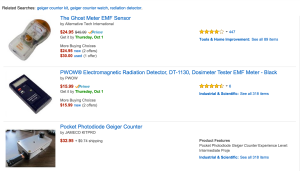 Other instruments that show up under a Geiger Counter search include devices that use diodes, CCD camera sensors, other silicon sensors, ion chambers and scintillation detectors.

There are many kinds of radiation sensors.  It’s important to sort through the sometimes confusing  information that is out there to find what you really need – or you could end up with Unicorn Meat, if that really exists.

If you take a little time to think about what you need, and then do a little research, it can help you understand each instrument and what it is capable of and whether that matches your need.

Published in geiger counter and News